Sauna is a room or a separate small wooden house that is heated up for people to sweat as recreation. In most cases - but not always - sauna use includes vapour production by pouring water on the hot stones and also washing.

Saunas have thousands of years of history especially with the Nordic nations. Several sauna types have been developed in history by the various groups of people. Therefore the definition of sauna cannot be unambiguous and - especially in case of sauna using nations - various hybrid types have been developed. In case the type is not specified below we are talking about the most known type the Finnish sauna.

Nordic nations have known the sauna most likely for 2000 years, however the first written records reach back only 1000 years. Originally it was a room for washing, bathing and since generally it was a clean room with clean water, it was used for child deliveries and for curing sick people. Older Finnish people say even today that they were born in a sauna.

It is challenging to say the date of its first appearance, since the definition of sauna is not clear and there have been many different transitional types. Is a hot room enough or is the presence of hot stones and steam creation also essential? In case we accept the latter, then many of the presently used saunas are also left out of the category.

Migrant Nordic nomads already had primitive saunas. They dig holes in the ground, made fire in them, closed the hole from above to make a place suitable for bathing. Most likely they used open fire and people had to wait until the fire was off or was smouldering only before they could use the sauna. The inipi of the Indians is very similar to this.

The Finnish word "sauna" is truly ancient, with no known etymological antecedent, likely it was used to describe the before mentioned digged bath. This hot room later developed into smoke sauna, that is the most traditional type of Nordic saunas.
A sauna from the book of Accretes: entitled "Travels",(1802)

According to the writings of the 17th century the stranger visiting the Scandinavian countries was "let into the room heated up to 90-100 degrees Celsius and as a display of utmost respect and honour he was allowed to totally undress and he was even promised that he would be whipped with birch tree sticks soon afterwards. The visitor receiving this treatment of utmost grace usually tried to flee at this stage saying something that he does not wish to receive this kind of special hell-like hospitality." In other parts of Europe it took a far longer period of time for people to realize what they were missing.

Saunas of old times were rooms with multiple functions. They were not only used for washing but also for drying meat as well as for other agricultural activities. It was also a place for curing: it was not only used as a tool for natural healing, but the doctor or charlatan also practised in the saunas. In case of the charlatan, the dark sauna contributed to the establishment of the mystic atmosphere. Saunas therefore were ritual locations, according to Finnish customs the probability of maiden girls to be taken was "increased" with a special sauna ceremony held on midsummer night (juhannuspäivä); an old lady kept saying magic things in the scent of poplar leaves and other plants.

Taken from the Swedish travel diary of Ur Lorenzo Magalottis (1674, Florence manuscript)

Until the beginning of the 20th century smoke sauna was the only sauna type. Its disadvantage is that heating up takes a lot of time, it is difficult to keep clean and it is more flammable. During the 20th century as a result of the industrial revolution, public saunas appeared in cities that were equipped with chimneys. After people took a liking of these places, they started to build similar saunas in the mökkis (generally lakeside, weekend holiday homes). In most cases a new one was erected simply besides the smoke saunas. Smoke saunas still remained out there for a period of time then they were dismantled after not being used and becoming rotten. In some places they are still present as a result of poverty or for tradition. A transitional type of sauna was the chimney sauna where the chimney was not a separate unit, but the smoke was released through the stones into the chimney. This solution did not solve many of the disadvantages of the smoke sauna: use was only possible after the fire was gone. The separate chimney solution was introduced in the 1930's.

iSauna Manufacture has been established with the mission to make the lifestyle of using a home premium sauna more popular.

Our initial main activity was the production of Finnish saunas and infra cabins. Today however we are proud to say that we play an important role in the introduction of sauna culture to Hungary with the designing and general construction of unique Finnish saunas, infra saunas, combined saunas, Himalayan salt cabins and wellness units as well as premium quality outside saunas and sauna houses.

Unique and exclusive solutions in case of sauna manufacturing and construction. Our professional knowledge and experience in line with the consultation and design group of long sauna manufacturing history makes it possible to create saunas for You, that meet your highest expectations and provide the maximum pleasure of the mixture of functionality and design in a way that the raw materials and the production technology are in harmony with the nature.

Our company, our factory at Dunaszeg, Hungary and our professional team have been founded and continuously working with the aim to provide our demanding customers with a customised sauna they have always dreamt of where they can have rest after an exhausting day and preserve health in their family at the same time.

We are proud to be able to say that all our saunas are built from first class materials only with cutting edge technology exclusively in Hungary, by Hungarian professionals and that we have successful cooperation with our foreign partners for years. Our ever changing shapes, unique ideas and most professional technology create saunas that decorate houses and gardens or add extra services for wellness hotels or fitness centres.

Unique premium saunas can only be produced out of high quality raw materials with level of expertise. All this is proven by our international TÜV permit and certification, only the iSauna sauna company has such a certification in Hungary. In case of combined outside saunas we are the only company with TÜV certification in all Europe. 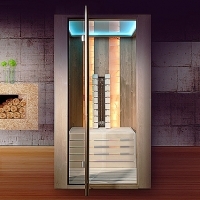 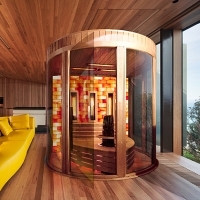 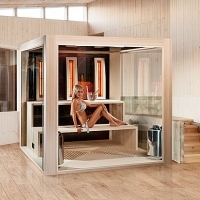 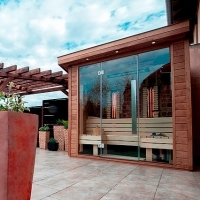 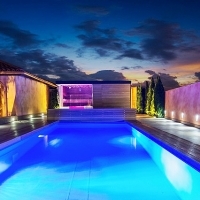